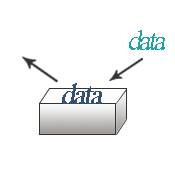 Sometimes in your program, you need to store data. During the execution of the program, computer processor stores those data in its memory cells before using those. If you use 100 different data in your program, then processor allocates 100 or more memory cells to store those data. Every memory cell has a number. In your program, you may need to use same data many times, therefore, to use a data for the next time in the program, you need to know the address of memory cell(s) where it is stored. But when you work with lots of data, it is not easy to remember those cell numbers. And, with the increase of data, it becomes harder or about impossible. To remember those cell numbers easily, programmers give each cell an easy name. This name is called variable. For example, if your age is 25 and it is stored in memory cell number 6927, is it not easy to remember the variable “age” instead of 6927 to refer the 25? You don’t need to know where 25 is stored in memory; variable is used to reference that location number.

Before using a variable, you need to declare it.

Syntax
The syntax for declaring a variable would be-

Example:
The syntax for declaring a variable named today is-

You can’t use $this as a variable name. It is a reserved word.

What is the use if a variable doesn’t hold a value? There are 2 ways to assign a value to a variable-

Syntax
The syntax for displaying a variable is-

Example:
The syntax for displaying a variable named today is-

Output:
Line 3 and 4 both display Wednesday.

Variable scope refers the parts of a script where the variable’s value is available after it is declared within a script. To understand scope properly, function knowledge is required. You‘ll about variable scope in the next lesson after function.

There are two types of variables in PHP-

As the names implies these variables are defined in the script by the users. In the above examples the variables we defined are all user-defined variables.

In the above example, the variable $today that I created is a user-defined variable.