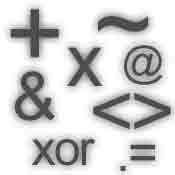 Depending on the number of values (or expressions) it takes, operators can be grouped in three categories.

These operators take only one value.

Computer uses binary system to represent anything. In binary system only two values 0 and 1 are used. These are bits. For example, the following table shows decimal 1 to 10 (that we use in daily life) in binary system-

If you look carefully in the above two tables, you’ll see that the difference in binary numbers between the two tables is the 0s at left side.

The following bitwise operators work with the corresponding bits in the two operands that it takes. That means, first bit of the left operand paired with first bit of the right operand, second with second, and so on.

Example of Bitwise AND

Example of Bitwise OR

Example of Bitwise NOT

In the above table, step 1 shows binary representation of decimal 4. After shifting 1 bit left, step 2 shows the result decimal 8.

In the above table, step 1 shows binary representation of decimal 4. After shifting 1 bit right, step 2 shows the result decimal 2.